We are collecting medical equipment and supplies for Ukraine | Learn more >

Shannon Bednarova has worked for Orthopaedic & Spine Center for over a decade as the Marketing and Community Outreach Director.

Over the time she has spent working for the practice, she has witnessed the large amount of durable medical equipment (braces, crutches, wheelchairs, walkers) that has gone out of the practice, being prescribed to patients for their musculoskeletal ailments, and for good reason. In fact, she had been the recipient of some of that DME herself. 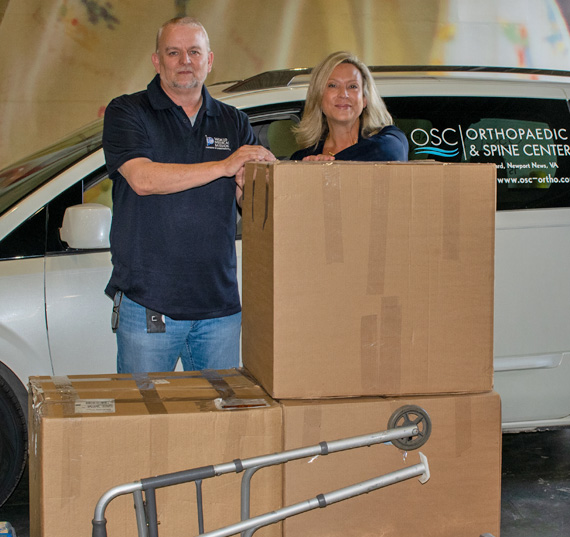 It often bothered her that these items weren’t being reused in any way. It seemed very wasteful to her that perfectly good DME couldn’t somehow be given to others for use, especially those in need. Yes, sometimes family members or friends would loan crutches, walkers or wheelchairs to others or maybe churches or other organizations would have a donation closet where members could bring in used items. But Shannon felt like there wasn’t a place that people could regularly send pretty much any gently used DME item to be recycled or repurposed to help others. Click for a full list of items accepted.

Given that there are hundreds of Orthopaedic practices in Virginia, hospitals, primary care physicians, physical therapy clinics, nursing homes, etc., dispensing DME – it all equals a lot of durable medical equipment that is being given out to patients, and much of it is not being reused and repurposed. Multiply that across the United States – the waste is enormous.

Fast forward to July 2018…Shannon was involved in a serious boating accident, while swimming, where she was backed over and caught in a running boat propeller. Thankfully, due to the efforts of four trauma surgeons at Sentara Norfolk General Hospital, she was sewn up and discharged from the trauma unit that same evening. She had several hundred sutures, but she was alive, able to walk, and had no damage to her internal organs, musculature or really much loss of blood. Her physicians were amazed at how little damage had been done, based on what could have happened.

As Shannon recovered from her injuries, she pondered why God had let her live, as so many do when surviving traumatic accidents. As a Christian, she felt like it was time for her to put her faith into action, by doing something to give back to her community. She wanted to do something about the waste of durable medical equipment that had been bothering her for all those years, in some kind of meaningful way.

She began researching, on-line, organizations who took charitable donations of medical supplies, specifically DME, and came across Samaritan’s Purse. This organization has many charitable arms, but Shannon found that their World Medical Missions Charity seemed to be just what she was looking for. As she researched further, she found that they took donations from around the country for needed medical supplies, DME (hallelujah!) and sent doctors and nurses around the world to partner hospitals in some of the most under-developed countries in the world.

So, Shannon got on the phone and called them about her vision of working together to repurpose used DME. She found that Samaritan’s Purse ministered to the most needy patients around the world, who would be grateful to receive the donated DME that many Americans had stored in their closets! Imagine, a pair of crutches for someone who has used a stick as an assistive device, or a wheelchair for someone who can’t walk and has no means of moving around. What a life changer!

Now Embrace Foundation is one of many organizations that donates much needed medical supplies, medical beds, unused diabetes syringes, splints, bandages and DME to Samaritan’s Purse for their Worldwide Medical Missions.